There is ample evidence that antibiotic use in various health care environments is often inappropriate. For example, according to the Centers for Disease Control (CDC) up to 70% of nursing home residents will receive one or more courses of systemic antibiotics in a year, most commonly to treat UTI’s, respiratory tract, and skin and soft tissue infections, but, it is estimated that between 40% and 75% of antibiotics used in this environment may be unnecessary or inappropriate.1 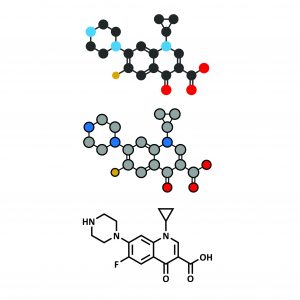 It is estimated that 5%e25% of patients taking antimicrobials will experience an adverse event with one in 1000 experiencing a severe adverse event such as Clostridium difﬁcile infection or Steven’s Johnson Syndrome.2 And, antibiotic use is increasingly being recognized as a major disruptor of an individual’s intestinal microbiome which can have profound negative health implications.3

Antibiotic-associated problems have been recognized and became a national priority in 2014 when President Obama issued an executive order directing the development of the National Ac-tion Plan for Combating Antibiotic Resistant Bacteria. This plan mandated that the Centers for Medicare and Medicaid Services and the Centers for Disease Control and Prevention issue guidance and best practices for antibiotic stewardship in various health care settings including hospitals and long-term care. Antibiotic stew-ardship refers to “a set of commitments and activities designed to optimize the treatment of infections while reducing the adverse events associated with antibiotic use.”1 As this national initiative evolves we can expect that the current approaches to reviewing and monitoring the use of antibiotic medications will be bolstered by requirements that facilities establish an infection prevention and control program that will include a detailed system for monitoring and assessing infections and communicable disease for all residents, staff, consultants and facility visitors. This will include antibiotic-use protocols and staff training overseen by a designated infection prevention- and control-ofﬁcer who is a clinician with specialized training in infection prevention and control beyond an initial professional degree.4 In light of this new emphasis on eval-uating the appropriate use of antibiotics this column will focus on revisiting the ﬂuoroquinolone (FQ) class of antibiotics, commonly referred to as quinolones.

Fluoroquinolones are a very frequently prescribed class of an-tibiotics and include: ciproﬂoxacin (Cipro), levoﬂoxacin (Levaquin), moxiﬂoxacin (Avelox) and norﬂoxacin (Noroxin). Numerous other FQs have been approved and subsequently with-drawn from the market due to a variety of potentially serious adverse effects. When quinolones were originally introduced they were shown to have activity against a broad spectrum of bacteria including both gram negative as well as gram positive organisms and existing data indicated they had a favorable adverse side effect proﬁle. With these properties, along with heavy commercial mar-keting, the FQs were rapidly adopted by prescribers, often as their “go to” antibiotic class, for treatment of a wide variety of infections.

When the FQs were ﬁrst marketed in the United States the full prescribing information identiﬁed that they were associated with tendinopathy and/or rupture of various tendons but the frequency of this problem was not known. The ﬁrst case of tendinopathy was published in 1983.5 Subsequently, additional case reports and case-controlled studies reported more quinolone-associated tendon problems, primarily rupture of one or both Achilles tendons.6 This complication received increasing attention as it became under-stood that it occurred more frequently than ﬁrst thought.

In 2008 the US Food and Drug Administration (FDA) determined that this problem was frequent enough and serious enough to require that all FQs have a “Boxed Warning,” commonly incorrectly referred to as a “black box warning,” added to their full prescribing information to warn of an increased risk of adverse events including tendinitis and tendon rupture.7 Not only does the warning note that the risk of tendinitis and tendon rupture is increased in patients of all ages it also notes that the risk is further increased in older patients, usually over the age of 60 years, as well as in patients concurrently taking corticosteroids, such as predni-sone, and in patients with kidney, heart or lung transplants.6

The overall prevalence of FQ-induced quinolone tendon injury in the general population is relatively low, ranging from 0.14 to 0.4%, however, in persons over the age of 60 the frequency of tendon disorders and rupture is 1.5e2.7 fold higher respectively and it is 46-fold higher in those concurrently taking corticosteroids and a FQ.6 The actual frequency is probably higher because it is likely that many cases go unreported. The FDA’s “Medwatch” Adverse Event Reporting System encourages health professionals and consumers to report adverse events such as quinolone-related tendon rupture but reporting is voluntary and it is estimated that the reporting rate ranges from around 1%e15% of the actual occurrence.8

The precise mechanism of FQ tendinopathy/rupture is unclear however, since FQs inhibit DNA function, the damage could be related to DNA replication and cell division in tendons. In addition, FQs may have a direct cytotoxic effect on enzymes found in mammalian musculoskeletal tissue.6
The mean latency period between initiation of FQ therapy and occurrence of tendinopathy/rupture has been reported to range between a few hours to months after therapy is discontinued with a median onset of 6 days.6

Bacterial resistance to FQs has grown as has an appreciation of potential adverse side effects to the point that in February, 2011 the risk of worsening symptoms for those with myasthenia gravis was added to the Boxed Warning. In August, 2013, the FDA required updates to the prescribing information to describe the potential for irreversible peripheral neuropathy (serious nerve damage).7 In 2016, the FDA approved much stronger warnings that both oral and injectable FQs are associated with disabling side effects involving tendons, muscles, joints, nerves and the central nervous system. These side effects can occur hours to weeks after exposure to ﬂu-oroquinolones and may potentially be permanent. Additionally, FQs can cause prolongation of the QT interval. Concerns about FQs are supplemented by the Infectious Diseases Society of America which recommends that, rather than considering them as ﬁrst-line agents as has been the case, FQs should be considered second-line treat-ment of patients with allergies to other antibiotics, patients with treatment failure to primary antibiotic and patients with pathogens that are resistant to the ﬁrst-line antibiotics.9

The increased understanding of FQs and their drawbacks pro-vides us with a classic example of how the true effects of a class of medications become understood. Initially most drugs, including the quinolones are approved based on clinical study in relatively few human patients, perhaps a few thousand or less. Then, as the drug is prescribed for increasing numbers of patients and previ-ously unappreciated side effects can be noticed. As was the case with FQs, isolated case reports of tendinitis/rupture were pub-lished after which patterns began to emerge as increasing numbers of health professionals became aware of a side effect that would not typically be considered to be intuitive. After all, who would think that antibiotics can cause tendon rupture? Then, continued prescribing of FQs allowed for further observation and scrutiny of data so the link became more clear. As stated by Antonio Carlos Arrieta, MD division chief, Division of Infectious Diseases, Children’s Hospital of Orange County, Orange, California, said. “Very rare side effects will be magniﬁed when we abuse an antibiotic millions of times”.9
The lessons learned from the FQs will be invaluable for the evolving national antibiotic stewardship initiative. They will un-derscore the fact that antibiotics can be involved in signiﬁcant and potentially disabling, life-altering interactions with other medica-tions and that these problems may not be appreciated when a new drug received FDA approval. Adverse effects and changing resis-tance patterns will require constant vigilance which will be a crucial component of the interdisciplinary team’s collaboration to optimize the treatment of infections through the evolving national antibiotic stewardship initiative.