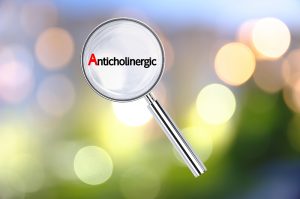 As a person ages they are more susceptible to the adverse effects of medications for a variety of reasons including decreased renal and hepatic function, the presence of multiple health conditions and increasing sensitivity of pharmacologic receptors in the body.1 In this column I will review the subject of anticholinergic properties of medications and will discuss how they can result in adverse effects.

Our bodies are a complex organism largely run by naturally occurring neurotransmitters such as acetylcholine that relay conduction throughout the central and peripheral nervous systems to send messages and instructions to the rest of our bodily tissues and organs. The more well-known neurotransmitters include dopamine, epinephrine, norepinephrine, serotonin and acetylcholine.

Many medications possess properties that either mimic or block the effect of acetylcholine. Those that block or antagonize acetylcholine are said to have anticholinergic properties. Anticholinergic activity is not inherently good or bad. It may be beneficial in some situations and in others it may be undesirable.  For example, certain antiparkinsonian medications such as benztropine (Cogentinâ) have beneficial anticholinergic activity and are used to restore the relative balance between dopamine and acetylcholine, a balance that is disturbed by the relative deficiency of dopamine that occurs in Parkinson’s disease.  Other medications such as Tolterodine (Detrolâ) are used to treat urinary incontinence through an anticholinergic effect that reduces contractions of detrusor muscles surrounding the bladder and increases the tone of the muscle controlling the bladder sphincter. Medications such as the first generation antihistamine diphenhydramine (Benadrylâ), take advantage of the common anticholinergic side effect of drowsiness which is why it is used to induce sleep. In fact, diphenhydramine is an ingredient in all of the common over-the-counter sleep aides.

Other than the relatively few conditions that can benefit from anticholinergic effect it is usually an unwanted side-effect that is best avoided.  For example, when diphenhydramine is used to induce sleep, the anticholinergic effect of drowsiness is a desired effect, but when it is used to treat allergies or a bee sting, drowsiness that may occur would then be considered to be a side effect.

Older adults may be more sensitive to anticholinergic effects in the central nervous system because of age-related changes in pharmacokinetics and pharmacodynamics, reduced acetylcholine-mediated transmission in the brain, and increased permeability of the blood-brain barrier.3

Anticholinergic toxicity classically presents with a family of symptoms. Many of the readers will likely remember from their pharmacology training the pneumonic: “Hot as a hare (hyperthermia), dry as a bone (dry skin), red as a beet (flushed), blind as bat (pupil dilation -mydriasis) and mad as a hatter (delirium). This pneumonic makes it easier to appreciate some of the common manifestations of anticholinergic toxicity but it may present with other symptoms, some of which create challenges in the world of geriatrics because they may be mistakenly interpreted as signs of the aging process including constipation, confusion, urinary retention somnolence, dry eyes and dry mouth. Because of this, it is imperative that health care professionals be on the lookout for the possibility of new symptoms being the consequence of drug therapy rather than the aging process.

Many of the anticholinergic effects experienced by those taking anticholinergic medications could be considered to be of minor consequence but I think it best to consider that all side effects, even the “minor” ones, can be serious and even lethal in the elderly. For example, drowsiness might be a minor annoyance in a healthy young individual but the same degree of drowsiness in a frail 85 year old could result in a fatal fall.

Because acetylcholine plays a role in brain function, including cognition, the relationship between anticholinergic medications and cognitive decline has received considerable attention.

It is thought that progression of Alzheimer’s pathology may be amplified with cholinergic blockade whereas enhancing  cholinergic transmission may reduce the deposits of beta amyloid protein.5 Anticholinergic activity has been shown to increase the prevalence of cognitive decline, decrease physical function and increase the risk of mortality.6  With the growing prevalence of cognitive impairment in the older adult population health professionals should be aware of the potential effect that medications with anticholinergic properties may have on cognitive and executive function and mortality.5

A recent study of more than 13,000 persons age 65 or older found that those taking more than one anticholinergic drug scored lower on tests of cognitive function (Mini-Mental State Examination [MMSE]), and also found that heavy users had a 68% higher risk of mortality during the course of the study.  The study determined that older patients who already have some degree of cognitive impairment are the most vulnerable to anticholinergic agents.5

Many studies have determined that there is an association between anticholinergic agents and either delirium, cognitive impairment or dementia.  Investigators discovered that changes in global measures of cognitive function, including the mini-mental score were often not dramatically decreased. Rather, they often identified deficits in processing speed, psychomotor performance, concentration/attention, problem solving, recall ability, and language skills. Delirium was frequently identified by disorientation, altered consciousness, disorganized thinking, and fluctuating alertness. In applying the significance of these observations to the clinical setting, many practitioners rely on global measures to evaluate cognitive performance and, therefore, may not accurately identify a decline in cognitive function when evaluating exposure to anticholinergics.3

With the growing prevalence of aging baby boomers and the increasing practice of polypharmacy, it appears that health care providers, particularly pharmacists, should become well-familiarized with the growing list of drugs with expected—as well as unexpected—anticholinergic effects.  This is particularly important because the majority of medicines commonly prescribed to older people are not routinely recognized as having anticholinergic activity and these medicines may be empirically prescribed based on their anticipated therapeutic benefits overlooking the risk of cumulative anticholinergic burden.8