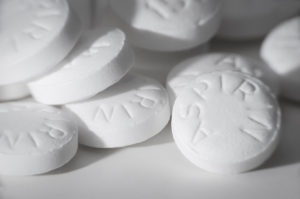 We all are familiar with the saying, “An apple a day keeps the doctor away” but we are more likely to take an aspirin (ASA) a day. Nearly 40% of US adults older than 50 years of age use aspirin for the primary prevention of cardiovascular disease (CVD) (prevention of ﬁrst MI or stroke) or for secondary prevention of CVD (prevention of recurrence of MI or stroke).1 In this column I’ll look at the daily use of ASA and will summarize the most current thoughts and recommendations.

Daily ASA use has become a routine part of the drug regimen of many elderly, particularly in “at-risk” individuals including those with diabetes mellitus; however, research published over the last ﬁve years calls in question the use of ASA for primary prevention of cardiovascular problems such as stroke and MI.2

Since drug therapy in the elderly is based primarily on a risk vs. beneﬁt assessment I’ll ﬁrst discuss the potential risk of daily ASA therapy.

As with any drug, ASA is not free of side-effects. The problems most commonly associated with ASA use include bleeding, primarily in the gastro-intestinal tract and in the brain in the form of intracranial bleeding. Both the frequency and severity of these problems increase with duration of ASA therapy and dose. There are a number of conditions and factors that can increase the risk of GI bleeds including history of GI ulcers or upper-GI pain, preexisting bleeding disorders, renal failure, severe liver disease and thrombocytopenia.2 Other problems that can increase the chance of both GI and intracerebral bleeding include use of anticoagulant drugs or non-steroidal anti-inﬂammatory drugs, uncontrolled hypertension, male gender and older age.2

A recently published 10-year study from England sheds more light on bleeding risks of ASA related to age of patient.3 Half of study participants were over age 75, and it was found that they faced an increased risk of serious and even fatal bleeding. One of the study authors was quoted as saying that antiplatelet drugs, such as ASA, prevented a ﬁfth of recurrent heart attacks and strokes but also led to about 3000 excess-bleeding deaths annually in Britain alone with the majority of those being over age 75.4 The author further stated that the beneﬁts of ASA for secondary prevention of recurrent heart attacks and strokes clearly outweighed the relatively small risk of bleeding but in those over age 75 the risk of serious bleeding is higher, although the risk of upper-GI bleeding can be cut by 70e90%by the concurrent use of proton pump inhibitors.

Now for the potential beneﬁts of daily ASA. Most people think of ASA as a preventative for cardiovascular disease but let’s ﬁrst look at an aspect of ASA that is less well known. There is considerable evidence that ASA reduces the risk of cancer including colo-rectal cancer (CRC). New research conducted at Oregon State University has found that the anti-cancer activity of ASA may be due to its effects on blood platelets rather than acting directly on cancer cells. It has been determined that platelets increase the level of an “oncoprotein” called c-MYC, which in turn, supports the growth of cancer cells and helps them spread throughout the body. The researchers found that in human cancers this compound is over-expressed which essentially means that the protein is over-produced. Since ASA inhibits platelets this reduces communication between platelets and tumor cells which, in turn, indirectly reduces tumor cell growth. The researchers pointed out that ASA’s anti-platelet effect is just as effective with low doses as it is with high doses. They also point out that the interaction between platelets and cancer cells occurs early in a tumor’s development which may mean that the routine use of ASA or other anti-platelet products might serve as a safe and efﬁcacious way to prevent cancer in higher risk individuals.5

More speciﬁcally, a recently published study suggests a link between low-dose ASA and reduced risk for speciﬁc type of breast cancer and some other cancers.6 Aspirin reduces inﬂammation and is also a weak aromatase inhibitor. Interestingly, a number of medications used to treat hormone-receptor-positive breast cancer including Arimidex, Aromasin and Femara, are also aromatase inhibitors. This preliminary study found that women who take low-dose ASA (81 mg) three or more times per week have a 16% lower risk of developing any type of breast cancer and a 20% lower risk of hormone-receptor positive, HER2-negative breast cancer.

Numerous studies have evaluated the role of ASA in preventing CVD and various governmental agencies and professional associations have released often conﬂicting recommendations and guide-lines regarding its use in either primary or secondary prevention of myocardial infarction or stroke. The 2011 American Heart Association/American Stroke Association guidelines for the prevention of stroke in patients with stroke or transient ischemic attack (secondary prevention), state that a 15% relative risk reduction in vascular events (stroke, death, MI) has been documented for aspirin compared with placebo.7

In 2014 the United States Food and Drug Administration (FDA) reversed its position that daily aspirin can prevent the primary risk of heart attack and stroke.8 The FDA also stated that, “. there are serious risks associated with the use of aspirin, including increased risk of bleeding in the stomach and brain, in situations where the beneﬁt of aspirin prevention has not been established.”

More recently, the United States Preventative Services Task Force (USPSTF) updated its previous recommendations and evaluated the use of ASA for the prevention of CVD and CRC. I encourage readers who are interested in more in-depth information on this topic to read this very well-written document.1

The report was based on an evaluation of a number of clinical studies and the USPSTF recommendations give considerable recognition to the importance of risk v. beneﬁt considerations and importantly, the report recognizes that clinical decisions, such as whether ASA should be taken daily to prevent CVD and/or CRC, are complex with many important factors for clinicians and patients to consider. These decisions involve more than just the scientiﬁc evidence alone and should include individual patient preferences.

The report points out that the optimal dosage of ASA if taken daily is not known. Various studies have looked at different dosages but they state that a pragmatic approach consistent with the available scientiﬁc evidence is the administration of 81 mg of ASA by mouth once daily which is the most commonly prescribed dosage in the United States.1

The USPSTF report points out that the implementation of such a decision is contingent on four primary factors: risk for bleeding, preferences about taking aspirin, baseline CVD risk and patient age. For example, it may take 5 years or more of taking daily ASA for reduction in CVD risk to be observed but it may take 10e20 years or longer for reduction of CRC risk to be apparent. These two factors, plus the increased risk of ASA-related bleeding tend to decrease the apparent beneﬁt in older patients, but if the patient has a strong belief in the value of ASA therapy, that may make such therapy more likely.

Recommendation: take 81 mg of ASA daily for primary prevention of CVD and CRC.
Adults age 60-69 years with 10% 10 year CVD risk. Recommendation: individualize to patient and concerns about risk v. beneﬁt. Patients who are not at increased risk for bleeding, who have a life expectancy of 10 years and who are willing to take low dose ASA daily for at least 10 years are more likely to beneﬁt from taking 81 mg ASA daily.

Adults younger than 50 years and 70 years or older: Current evidence is insufﬁcient to assess the risk v beneﬁt of daily ASA therapy. The report notes that they were unable to assess the balance of beneﬁts and harms in these age groups and they further recommend that adults 70 years of age or older who are currently taking ASA should discuss with their clinician whether they should continue.

The USPSTF recommendations discussed above are the most recent recommendations regarding routine aspirin use. They are endorsed by the American Academy of Family Physicians.9 The American Heart Association currently makes the following recommendation, “People at high risk of heart attack should take a daily low-dose aspirin (if told by their healthcare provider) and that heart attack survivors regularly take low-dose aspirin.” The organization prudently points out that routine ASA therapy should not be started without ﬁrst consulting a physician and they also point out that risks and beneﬁts of ASA therapy vary for each person.10

I’d like to be able to provide the readers with a clear and deﬁnite recommendation for daily ASA but, as pointed out by researchers and professional societies and organizations, ASA should be individualized and used when beneﬁts exceed potential risk. And, risk vs. beneﬁt is what it’s all about in geriatric drug therapy.